Graffiti6…a really great opener! They were great and hopefully Bart downloads a few of their songs soon.

So, you guys…I LOVE Eric Hutchinson.  From the first time I heard “Rock And Roll” on VH1…it was early in the morning, in 2008…I was hooked.  (It took a second for the awesomeness of the song to sink in because I was puzzled that a music t.v. channel still played any actual music videos.  I mean, what?  That is crazy!)

When Bart told me he was coming to Omaha in April…I knew we’d be there, front and center…and we were!  Bonus points that it was at the Waiting Room, so the tickets were cheap.

The concert was amazing…Eric is a great live performer.  We’ve seen several videos of live shows or “previews” or whatever they are called before a concert at a radio station.  They are so funny.  He loves to have a singing and dance party and expects you to do your part to have a good time.  He makes up impromptu songs which are hilarious…he asked for the audience to tell him things that “Put Omaha On The Map…”  Baseball, beef, and WARREN BUFFET…well, he went with that and came up with a funny song about how he put WB’s secretary on the list at the door to get into the concert.  He was getting so into it that he had to stop b/c he was laughing so hard.  I love an artist who actually engages the audience and doesn’t just stand there and sing.  Sing.  Sing.  The end.  I love it when they talk to you, even if it is BS that might be said in every town he performs in…I don’t care, it was fun!

Speaking of laughing…his band was so happy the entire show.  They all had big smiles on their faces and it just made you want to smile, too.  Especially the bass player…his hair was wild and his smile was contagious.

YAY for hubbies who think like me…OF COURSE I wanted you to take this picture! 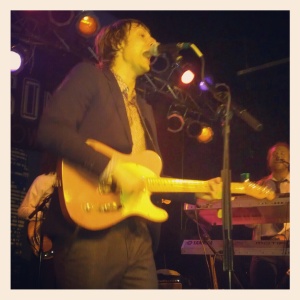 All hot and sweaty…rocking out is hard work

I really want to learn to play the piano. Not to play church hymns but so I can rock out!

HAIR…Eric’s bass player has some amazingly bouncy hair AND he is constantly happy. Bart and I watched the release concert live online and he had a huge smile on his face the whole time…same was true for this concert!

So, I’ve babbled.  A lot.  Go see Eric Hutchinson and his band if they are coming near you.  Totally worth it.  You won’t regret it, even if you have no clue who he is…you might have a new band to add to that play list of yours.

The concert was just great.  The energy, the songs.  Everything…but that drunk girl who was overly zealous behind me who kept yelling about marrying EH.  And her stupid friend who kept saying, “I can vouch for her”.  Dudes, chill.  It was annoying.  And not funny.  Seriously.